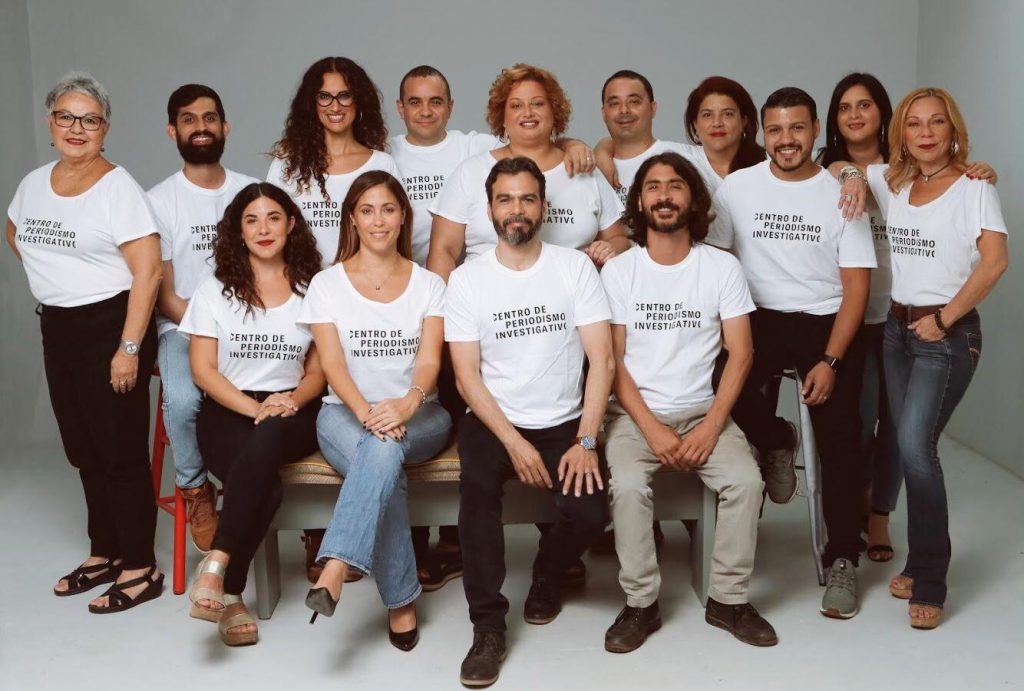 The Aronson Awards proudly recognize the outstanding and groundbreaking work of Puerto Rico’s Centro de Periodismo Investigativo with a special James Aronson Award for Media in the Public Interest for providing in-depth information and analysis vital to the people of Puerto Rico and in the US. As CUNY Chancellor Félix V. Matos Rodríguez noted:

“The James Aronson Awards recognize the best in social justice journalism that informs and thereby empowers the public. Puerto Rico’s Centro de Periodismo Investigativo (CPI) proved the value of that work this summer when it obtained, exposed and explained a trove of hurtful comments made by officials at the highest echelons of power on the island. The reports sparked a widespread outcry that resonated across the globe and provoked swift change. I am pleased to acknowledge the critical contributions of the CPI to my homeland at a key point in its history.”

Texas is oil and gas country. Behind denials of climate change is a more alarming story. Even as human populations suffer the effects of devastating storms and environmental degradation, this series exposes the doubling down on fossil fuels, this time for export, and with the full participation of the Chamber of Commerce, corporations and the US government. A must read for the environmental movement.

A provocative and compelling piece, Manhattan Gulag exposes extreme conditions at the Metropolitan Correctional Center (MCC), a pre-trial solitary confinement facility plagued by civil and human rights abuses and violations. These include filthy conditions, vermin infestations, substandard medical care, and violence and abuse at the hands of guards. The reporter spent 18 months investigating life inside MCC’s cells of 17 feet by 8 feet, with no natural light and isolation so extreme that inmates are punished for speaking through the walls. But while the detention center sits just blocks from City Hall and Wall Street, only few people knew that a gulag exists right in the heart of Lower Manhattan.

Shocked and Humiliated
Susan Ferriss
Center for Public Integrity, in collaboration with The Washington Post

This outstanding investigation reveals how federal agents at US airports, border crossings and immigration detention centers used vaginal probing, shackling, handcuffing, and hours-long interrogations as federal officers scrutinized people in search of hidden drugs.  In a profound and direct style of reporting, Ferriss uncovered and documented 11 invasive-search legal claims, and her reporting revealed that six had resulted in government settlements with victims totaling more than $1.2 million in payments.

The reporters document 9,000 environmental problems in Philadelphia’s public schools, thanks to dogged reporting and interviews with more than 120 teachers, parents, students and experts. The parents’ stories about their children were compelling, heartbreaking and unassailable. The story changed the public dialogue and led to significant reforms and funding that affected tens of thousands of children.

Forty-five percent of the residents in Milwaukee’s 53206 ZIP code live below the poverty line; nearly 4,000 of its men are or have been in prison. Andre Lee Ellis has spent the last 5 years on this battlefield. His weapons are fruits and vegetables, mentorship and love. “We Got This” is a community garden where 58 year-old Mr. Ellis mentors endangered black boys, ages 12 to 17. This is also where the reporter grew up and, in journal entries, he reflects on reporting from a place he once called home.

Set in Pennsylvania’s prison system, “Father. Son. Cellmates.” has tremendous narrative power as you meet the fathers and sons who share the same prison cell and gradually learn how they came to be who they are and where they are. This feature story required tremendous reporting diligence to both navigate prison bureaucracies and win the trust of the prisoners themselves and get them to open up about their lives. At a time when efforts are growing to scale back or abolish entirely the U.S. system of mass incarceration, Melamed helps us better understand how that system continues from one generation to the next.

Rob Rogers is the 2019 recipient of the Cartooning with a Conscience Award for the range of his work, unique artistry, and poignant social justice commentary. After 25 years as the award-winning editorial cartoonist for the Pittsburgh Post-Gazette, Rob Rogers was fired in June of 2018 for drawing cartoons critical of President Trump. Rather than bow to pressure from management to soften his criticism of Trump, Rogers risked his livelihood to maintain his integrity. Cartooning with a Conscience indeed! 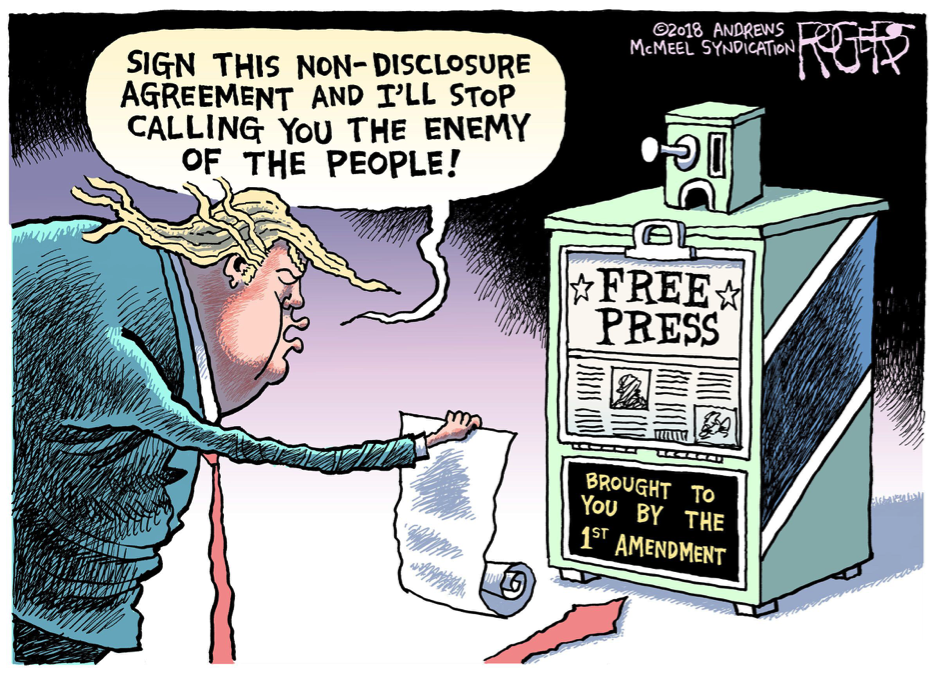 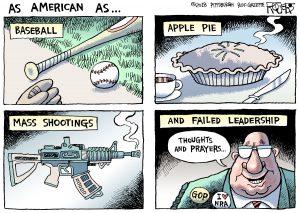 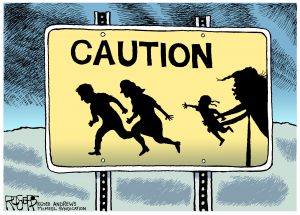 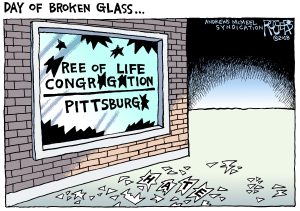 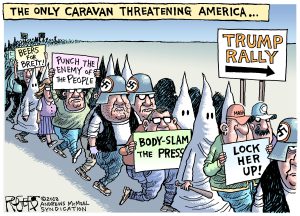 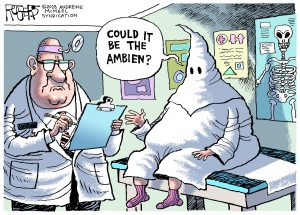 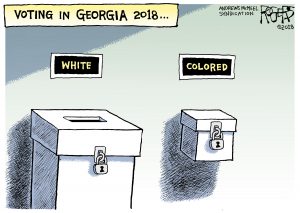 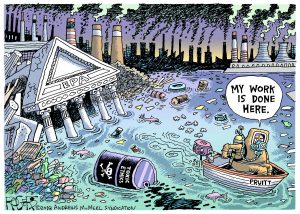 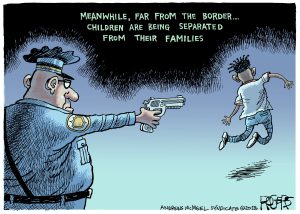 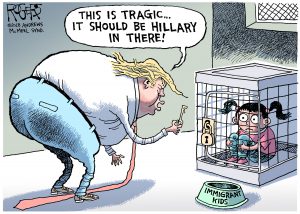 Maria Luisa Imbachi is a senior at Hunter College majoring in media studies with a concentration in journalism. Born in Colombia and raised in East-Elmhurst, Queens, Maria Luisa was a staff writer for The Athenian, covering sustainability and immigration issues. Her multimedia stories about Dreamers offer a unique insight into people who have an opinion but often no voice and her stories on the environment help students understand the importance of sustainability.

Too Big to Fine, Too Small to Fight Back
Naveena Sadasivam
The Texas Observer