Gary Younge
Whether writing in lucid prose about the deferred dream of Barack Obama, his own identity as a black Briton in a predominantly white society, or the prevalence of guns and violence in American life, Gary Younge’s award-winning work has been probing, illuminating and insightful. An editor-at-large for The Guardian, Younge has received numerous awards, including the David Nyhan Prize from Harvard University, and was an Alfred Knobler Fellow at the Nation Institution.

Ryan Gabrielson is a reporter for ProPublica covering the U.S. justice system. Previously, his stories for the Center for Investigative Reporting on violent crimes at California’s board-and-care institutions for the developmentally disabled were a finalist for the Pulitzer Prize for Public Service. In 2009, as a reporter at the East Valley Tribune in Mesa, Ariz., he and colleague Paul Giblin won a Pulitzer Prize for stories that exposed how immigration enforcement by the Maricopa County Sheriff’s Office undermined investigations and emergency response.

Topher Sanders covers racial inequality for ProPublica. Prior to joining ProPublica in 2015, he reported on education, city government and criminal justice for The Florida Times-Union. His data-driven reporting on juvenile plea deals and the time Jacksonville juveniles spend in pre-trial detention facilities was a finalist for an Investigative Reporters and Editors award in 2015. His reporting on questionable behavior by Jacksonville’s elected public defender prompted Florida Gov. Rick Scott to order an investigation of the office in 2013.

Why we did this project:
The reporting began as a search for stories that would illuminate the plea deals that dominate our criminal justice system, to explore what role evidence plays in the courts when more than 90 percent of convictions come by guilty plea. We were checking the National Registry of Exonerations regularly, which includes very few plea deal cases. But suddenly, by mid-2015, that was changing. Dozens of overturned drug convictions out of Texas joined the database. Reading through the case summaries, it seemed to us the unifying characteristic was inaccurate police field tests. Again and again, innocent people pleaded guilty with only the officers’ results as evidence identifying illegal drugs.

Sarah Ryley is a staff writer at The Trace covering gun violence and a John Jay/ Harry Frank Guggenheim criminal justice reporting fellow. Previously, she was an investigative reporter at The New York Daily News, where she primarily covered policing and the intersection of civil and criminal law. Her work at The New York Daily News triggered numerous reforms, including the passage of the Criminal Justice Reform Act and the Nuisance Abatement Fairness Act.

Why I did this project:
I came across a lawsuit that mentioned that the city tried to evict a woman from her home based on criminal charges that were dismissed because the lab test came back negative for narcotics. I was shocked that an entire family could be rendered temporarily homeless, and a son banned from his mother’s home for life, over such flimsy allegations. I wanted to see if this was systemic or an anomaly.

Brian Bienkowski serves as editor of Environmental Health News and its sister site, The Daily Climate. He reports on the intersection of the environment and human/wildlife health, including environmental justice, endocrine disruption, and climate change and water quality. Bienkowski holds a master’s degree in environmental journalism and a bachelor’s degree in marketing from Michigan State University. He lives with his girlfriend, Dani, and their five (!) four-legged friends in Michigan’s Upper Peninsula.

Why I did this project:

I was gathering data for a story on the Crow Reservation’s water quality and realized their fight for clean water all too common and that tribes across the country are locked in struggle to protect their water, their environment, and their future. Dwindling or contaminated water not only sickens tribes but also taints traditions and squeezes spiritual connections to a breaking point. These are stories of environmental injustice and they needed to be told.

About The Texas Tribune:
The Texas Tribune is the only member-supported, digital-first, nonpartisan media organization that informs Texans — and engages with them — about public policy, politics, government and statewide issues. The Texas Tribune and its destination website were launched in November 2009, thanks to $4 million in private contributions as seed funding, a small band of talented computer programmers and some of the most accomplished journalists in the state. Now with a staff of nearly 50 dedicated reporters, editors, technologists, designers and business leaders, the Tribune has continued to advance its mission of bringing greater transparency and accountability to public policy, politics and government through news, data and events.

Why we did this project:
From the time Donald Trump announced his run for the White House until the brash billionaire prepared to take the oath of office late last year, a team of reporters at The Texas Tribune went deep on the issues that would fuel his rise more than any other: border security and immigration. Over the course of the yearlong project, the Tribune traveled to violence-torn Central America, to the most heavily crossed patch of the U.S.-Mexico border, and to the U.S. worksites where so many immigrants find low-paying jobs and exploitation. All our stories had something in common: They were about people caught up in a giant international smuggling ecosystem that’s being constantly nourished by the insatiable U.S. demand for illegal drugs and undocumented laborers.

Receiving the award on behalf of the 50 reporters involved in this series:
Jay Root is a native of Liberty. He never knew any reporters growing up and has never taken a journalism class in his life. But somehow he got hooked on the news business. It all started when Root walked into the offices of The Daily Texan, his college newspaper, during his last year at the University of Texas in 1987. He couldn’t resist the draw: it was the biggest collection of misfits ever assembled. After graduating, he took a job at a Houston chemical company and soon realized it wasn’t for him. Root applied for an unpaid internship at the Houston Post in 1990, and it turned into a full-time job that same year. He has been a reporter ever since. Root has covered natural disasters, live music and Texas politics — not necessarily in that order. He was Austin bureau chief of the Fort Worth Star-Telegram for a dozen years, most of them good. He also covered politics and the Legislature for The Associated Press before joining the staff of the Tribune. Root is the author of Oops! A Diary From The 2012 Campaign Trail, an insider’s account of Texas Gov. Rick Perry’s dramatic collapse in the 2012 presidential race.

The Crisis Within, How Toxic Stress and Trauma Endanger Our Children, Nancy Cambria, Photos and video by Laura Skrivan
St Louis Post-Dispatch

Nancy Cambria joined the staff of the St. Louis Post-Dispatch in Sept. 2005. Cambria was the runner up for the Annie E. Casey Medal for Meritorious Journalism, in 2012, for her special report on the high rate of child deaths in unlicensed and illegal day cares in Missouri. A New Jersey native who grew up in Montclair, Cambria graduated from Skidmore College and received a master’s in creative writing from Ohio University, Athens.

Laurie Skrivan has worked at the St. Louis Post-Dispatch since 1997. A St. Louis native and graduate of the University of Missouri School of Journalism, she was part of the team that won a Pulitzer Prize in 2015 for covering the unrest in Ferguson. Her work has been recognized by Pictures of the Year International and by the National Press Photographers Association.

Why we did this project:

Nancy Cambria and Laurie Skrivan were among more than two dozen reporters and photographers at the St. Louis Post-Dispatch sent to cover the continuing protests and unrest in the aftermath of the fatal shooting of Michael Brown by a Ferguson Police officer. Cambria, the newspaper’s children and families reporter, was struck by the number of toddlers and young children she saw on the often volatile protest lines. Skrivan was interested in documenting the daily lives of families living within yards of the protests and a highly militarized police presence. Cambria decided to explore the issue of trauma and toxic stress more deeply in the community after she had discussions with therapists at a nearby Red Cross emergency drop-in center. They told her residents weren’t just traumatized by Brown’s death and the ensuing unrest. They were also re-living past trauma from growing up and living in impoverished, often violent neighborhoods.

With the help of a National Center for Health Journalism fellowship, Cambria learned about brain development and “toxic stress” and its relationship to poverty and poor adult health outcomes. Not long after Skrivan and Cambria formally began their reporting in the neighborhood for the project, Jamyla Bolden, 8, was fatally shot through a window while doing her homework. Jamyla lived just blocks away from where Brown was killed a year earlier. Cambria and Skrivan followed children and families who knew Jamyla for seven months to create their special report.

Originally from Chicago, Ernest Owens is an award-winning multimedia journalist and editor of G Philly for Philadelphia Magazine. Owens, 25, has reported on a range of social issues connected to race, LGBTQ, politics, and pop culture. His work has been featured in USA Today, BET, The Huffington Post, The Advocate and many other national publications. The University of Pennsylvania alum currently serves as the board treasurer of the nation’s oldest press club, The Pen & Pencil Club, and as board secretary of Philadelphia Community Access Media.

Why I did this project:

Investigating the decades-long issue of racism in Philadelphia’s LGBTQ community was simultaneously a personal and professional liberation. Being an openly black gay man who have seen how the intersectionality between race and sexual orientation isn’t always as harmonious as one imagines, reporting on the diverse activists who pushed forward their demands for a more inclusive community reinforced why I chose to enter this field in the first place.

Cartooning with a Conscience

Pat Bagley
The editorial cartoonist for The Salt Lake Tribune for 38 years, Bagley is a popular commentator on the comic politics of Red State Utah. One of the most reprinted syndicated cartoonists with politicalcartoons.com, Bagley has won prestigious cartooning awards, including the 2009 Herblock Award, co-winner of the prestigious Prix de l’humor Vache in France, and was a finalist for the 2014 Pulitzer Prize.

Statement
I remember learning about politics from editorial cartoons when they helped me puzzle out what Nixon was up to and what Watergate was all about. They were my Rosetta Stone to the world of politics. I can easily imagine some girl or boy today furrowing their forehead over a cartoon done by me, or by one of my colleagues. I can also see a light suddenly going on and the gift that was given to me is passed to another generation. 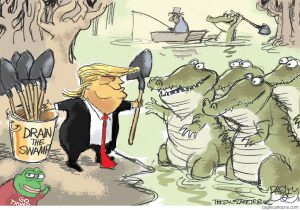 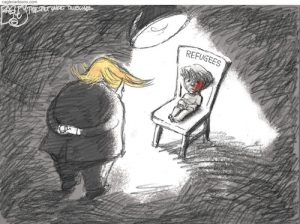 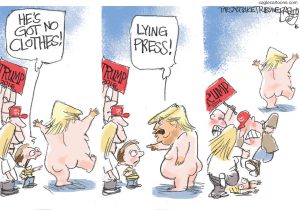 THREE TOURS, produced and directed by Betty Yu, is a documentary that captures the lives of three U.S. military veterans, Nicole Goodwin, Ramon Mejia and Ryan Holleran, as they work to heal their wounds and battle with PTSD resulting from their deployments in Iraq. The film follows their transformation from U.S. military trained soldiers to agents of change advocating for proper mental health treatment of veterans and an end to unjust wars.

Betty Yu graduated from the IMA MFA Hunter College program in 2016. She is a Chinese-American interdisciplinary, multi-media artist, educator and community activist. Her documentary and multi-media work is shaped and influenced by her direct experience as a daughter raised by garment worker parents who toiled in sweatshops after arriving from Hong Kong over 37 years ago. This upbringing undoubtedly frames who she is as an artist today. In her artwork she approaches social issues through personal story, family narrative and community history. Her work explores issues ranging from labor rights, immigrant justice, and gender equity to militarism.